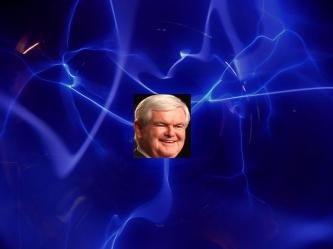 Long thought of as figurative, Gingrich's moral universe does exist. It's in Virginia.

MACLEAN, VA – It was discovered today that Newt Gingrich literally constructed his own moral universe, mostly built out of mirrors, birch bark, and headshots.

“It’s amazing,” confirmed one reporter, verifying the find. “When you walk inside, it’s impossible to be wrong. No matter where you stand, you always have the moral high ground. I didn’t want to leave.”

The moral universe was built in a shack behind the Gingrich property in McLean, Virginia. Visitors can only be inside it for minutes at a time due to high levels of electromagnetic radiation.

“We usually give people lead aprons,” said one guard, dressed in a hazmat suit, “although the radiation doesn’t seem to affect Gingrich at all.”

Jessica Morgan, a supporter of Gingrich, was taken aback. “I always wondered how he could justify his various infidelities with the excuse that he was working too hard for his country, or where he got the balls to say he was only a historian for Freddie Mac. But now that I know he’s constructed his own moral universe, it makes perfect sense. I’m a little relieved, frankly.”

When asked about the moral universe, Gingrich was happy to take credit. “As everyone knows I teach a class on constructing your own moral universe at Emory University. What kind of hypocrite would I be if I didn’t have one? That’s right, I wouldn’t be a hypocrite, because I have my own moral universe. You’ve been paying attention.”

The news however of Gingrich’s moral universe did not please everyone, especially Antonio Ereditato, the lead scientist at the CERN hadron collider. “We’ve spent millions of dollars trying to find the so called God particle, but now because of Gingrich, our search is over.”

He added, “This is going to put a lot of people out of work. I hope it doesn’t hurt his campaign.”

One comment on “Newt Gingrich Literally Constructs Own Moral Universe”

This entry was posted on 01/19/2012 by literallyhumor in Fake News and tagged gingrich, moral, newt, president, primary, republican, satire.