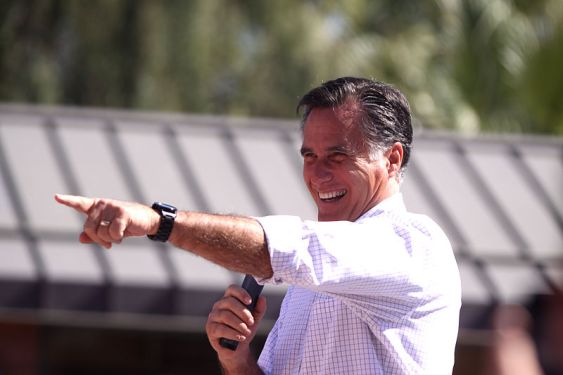 No one is certain who Romney is pointing at.

BOSTON – Throughout the election campaign, Mitt Romney’s five sons, Tagg, Matt, Josh, Ben, and Craig, played an essential role in helping their father get the word out. But a dark rumor being leaked today suggests that Romney is a little disappointed with one of them.

“He’s pissed,” said Brian Jones, a campaign strategist. “He’s never asked much from those boys and has always been a good father. This was their time to give back. One of them didn’t.”

Each son brought their own touch to the campaign trail. Craig is fluent in Spanish and appealed to the Hispanic community, Josh gave speeches, Matt kept things light on the trail, Tagg worked social media, and Ben, the only one not to go into business (a radiology student), occasionally helped out, though he mostly shied away from the spotlight. Sources suspect it’s Ben.

“I don’t think anyone should be playing the blame game,” said Heather Martin, a campaign fundraiser. “Those boys did what they could. Besides, I didn’t see Obama’s daughters doing a single thing. So what if they’re young?”

“When you look at the numbers,” said Bryce Morgan, a statistician, “it shows that Romney would have defeated Obama – if one of the brothers did just a little more work.”

Morgan said he wasn’t quite sure who Romney is mad at. “It’s gotta be Ben, though. He’s the only one with blond hair. That creates a distance.”

Romney has refused to comment on the matter and finds the speculation ridiculous. His entire family joined him for a recent press conference.

Sources indicate that Ben Romney has been grounded.

This entry was posted on 11/15/2012 by literallyhumor in Fake News and tagged comedy, election, obama, politics, romney, sons.